Never to be forgotten

A one man show about memory and the significance of loss.  See the Memory Man perform in the High Street at 12.30pm and 2.30pm 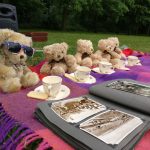